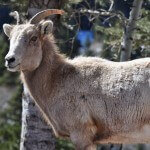 If you even have a commute it might only be a few minutes, but often includes traffic jams of Big Horn Sheep coming down from higher elevations to lick the salt off the roads. These beautiful animals are avid climbers, if one or two are on Highway 550, look up and you can pick out several more sheep of varying sizes perched on the rocks and outcrops above the road. You can tell the difference between males and females by the size and shape of their horns. Male Big Horn Sheep have larger horns with bigger curls whereas females have smaller horns with not much of a curl. 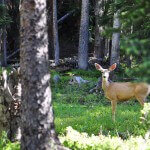 Another sight you will see on a scenic drive are deer and elk covering the fields. They come down to lower elevations during the colder months for food. Elk are stately creatures that graze in open fields. One of the largest species of deer in the world, elk are easy to distinguish from their relatives, the mule deer. Elk seldom come to town any more, and are seen most frequently in the spring as they head for higher altitudes on their annual migration. 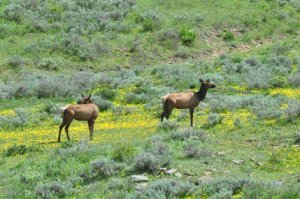 Deer on the other had are more bold; coming into yards to eat all sorts of yummy greens you might be trying to grow. They love apples that have fallen in the yard in the fall as well. There are several deer who have taken up residence year round here in town. It is not unusual to see a few hanging out at Fellin Park in the evenings, or waiting patiently at a crosswalk on Main Street as they head down toward the Box Canyon Lodge, where they enjoy bedding down in the warm area near the hot springs. 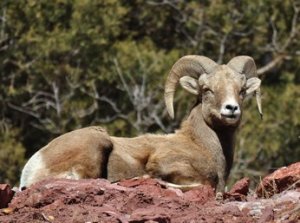 One of my favorite friendly critters just north of town are the half siblings Belle and Silverjack a sweet pair of donkeys. They love to say hi to anyone who stops to see them. Donkeys have a long history in Ouray County. Having been the primary pack animal used by miners, the area referred to as “Jackass Flats” received its name because this was the retirement home for donkeys who had gone blind from their work in the mines. Of course, Belle and Silverjack have no such history, just a lot of love.

Another unique thing you will see near town is a herd of Yaks. They are beautiful enormous creatures with tons of shaggy hair. They can weigh anywhere from over 600 pounds to over 1,800 pounds. They are used for meat, milk and for their wool. They mostly live in the Himalayas, but we happen to have a herd of them right here in Ouray. While traveling in Nepal I got to eat lots of yak products such as yak burgers, yak cheese, and we were served muesli with yak milk. I personally think the dairy products taste a lot like goat. Yak is actually the proper name for the male and a female is called a dri, but commonly they have become know as yaks.

My other favorite locals are the Marmots, also known as Whistle Pigs because of the sharp whistling noise they make. They are a golden brown with the cutest face. They live in holes in the ground or in the rocks. You find them higher up in the mountains. But beware, they like to chew wires on your car. Here is one I made friends with while hiking to Ice Lake.

There are many other beautiful and amazing creatures you may catch a glimpse of while visiting Ouray. From exotic domestic pets, to the occasional lost moose, you never know who you might meet in Ouray!