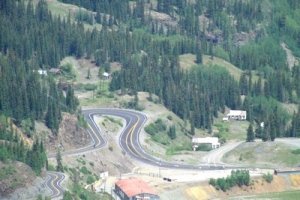 The San Juan Skyway is probably the prettiest drive in Colorado and encompasses such diversity of landscapes that it is a favorite year round.  The San Juan Skyway Scenic Byway is a 236 mile journey (6 hours without too many stops) in Southwest Colorado and includes the towns of Ouray, Ridgway, Telluride, Dolores, Cortez, Durango and Silverton.  Drive the circular route in either clockwise or counterclockwise direction and jump on anywhere.  If you have a fear of heights, driving north from Silverton toward Ouray puts your car or motorcycle on the mountain side during the descent into Ouray along the Million Dollar Highway and many people prefer that side of the road. 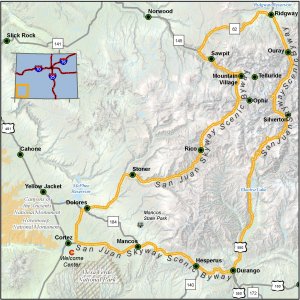 This road is a fantastic ride for those on motorcycles too.  The road is less traveled and the pavement quality is mostly good. However, the range of climates can be extreme so bring appropriate gear.  You have to be prepared for thunderstorms at any point and the tops of the passes can be chilly (some might say cold), even in summer.  Cortez is downright hot in summer.

The route I describe heads in a counterclockwise direction and starts in Ouray.  Head north along US 550 until you reach Ridgway, a mere 10 miles away.  Between Ouray and Ridgway, enjoy the “magic carpet”, several miles of pasture that blanket the valley floor and notice the ranches.  At the only traffic light in Ouray County, turn left on Highway 62.   As you drive through Ridgway and cross the Uncompaghre River, notice the kayak park below as well as the nice river walk that leads you to the Ridgway State Park, several miles north of town.  Pass Hartwell Park on your right; it was used to film in the filming of one of the scenes in the original version of True Grit. 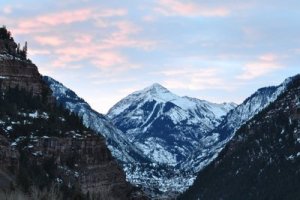 Continue on Highway 62 west and drive parallel to the Sneffels Massif, an incredibly rugged mountain mass that takes your breath away.  Standing prominently in the middle is Mt. Sneffels, a beautiful Colorado 14er (mountain higher than 14,000 feet) and the only one in Ouray County.  This area is a photographers paradise and during the peak fall foliage season, this section of the drive provides some dramatic scenery; golden aspens juxtaposed with the jagged, snow dusted peaks.  These mountains run along an east to west axis which is quite unusual for Colorado Mountains.  At the top of the Dallas Divide, there is a scenic overlook.  Stop there and enjoy the views.  Head down the other side and in Placerville, turn left on Highway 145 and head towards Telluride.

Telluride is an old mining town with a huge ski area.  It is broken into two small towns, Mountain Village and Telluride.  You must detour about 2 miles to see downtown Telluride.  The gondola runs free nearly year round and can be a fun stop (Public Transportation, Mountain Style!).  You can catch it in either Mountain Village or Telluride. 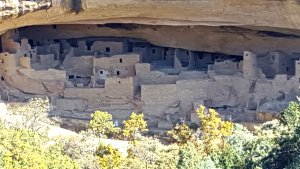 Just past Telluride on Highway 145, Mt. Wilson is a prominent feature of the landscape.  It too is a 14er.  You can continue on this road and go over Lizard Head Pass, a lovely stretch of road with a mild approach on both sides and enter the town of Rico.  From Rico, continue along the route that parallels the Dolores River and descend into the valley into Dolores.

While in Dolores, train afficianados will appreciate their fully operational Galloping Goose and train museum that was restored in the late 1990s.  This train/car combination was part of the Rio Grande Southern Railroad that was conceived by Otto Mears.

The Anasazi Heritage Center is located near Dolores and provides families and heritage travelers great insight into the ancient puebloans.  Their museum has interactive exhibits, including corn grinders, weaving looms, and computer games that provide hands on teaching.  This museum, operated by the BLM, is world class.  This museum also serves as a visitor center for those who want to explore Canyons of the Ancients National Monument, one of the largest concentrations of ruins of the Ancient Puebloan people.  This area also has numerous hiking trails and outdoor adventures with the backdrops of the cedar forests and rocky cliffs.  Get trail info from the Anasazi Heritage Center.

Once in Cortez, you are in Mesa Verde Country, which is the home to Mesa Verde National Park. (Photo courtesy of Mesa Verde Country and is of Balcony House Ladder Climb).  An incredible array of preserved cliff dwellings and 14 centuries of human history exist within the park and it is definitely worth a trip.  You can stay in the park at the Far View Lodge and it is a favorite to those seeking to experience Mesa Verde.  If you have interest in SW Colorado archaeology, then you should plan a few days in this area.  There are other areas of interest including Lowery Pueblo, Hovenweep National Monument and Ute Mountain Tribal Park.

The towns of Mancos, Dolores, and Cortez also boast a strong agricultural tradition so you can visit ranches, farms, wineries, and farmer’s markets too.  There are also numerous festivals that happen in the area that make it a great stop on your trip to Southwest CO.