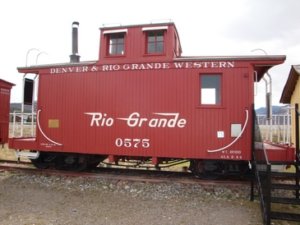 The Ridgway Railroad Museum, located near the only traffic light in Ouray County, recently opened its 2011 season with a new look and several new exhibits.  “As many people know, we had a water pipe burst during the extreme cold snap in February,” said museum vice-president Jim Pettengill, “so after repairs were completed we took the opportunity to spruce up the facility.  Fortunately, none of the exhibits were damaged.  We’ve repainted, and added two new exhibits inside the building.  One is a unique double dispatcher’s desk that came from either the Ridgway Depot or the Rio Grande Southern office building.  It’s set up with its original telegraphy equipment, and two operators can work at the same time because both sides of the desk are mirror images of each other, with identical equipment.”

“We also have a wonderful new diorama of the Ridgway railyards,” Pettengill continued.  “This was a gift from the estate of Richard Dorman, a respected author of many books on Colorado’s narrow gauge railroads.  Mr. Dorman was also a nationally known modeler, and his personal layout was based on the RGS and had been featured in top modeling magazines.   We are very fortunate that his widow honored us by donating the Ridgway portion to us.  It is incredibly detailed, and will allow us to show what things were like here when the railroad was still active.  We had to build a lighted enclosure for the diorama, and the finished display is impressive.” The museum’s most obvious new exhibit arrived last week – a very special railcar.  “This car was donated to us by the railroad preservation group in Grand Junction,” said Pettengill.  “They felt that it belonged here because it operated on our railroads.  This car is one of a kind.  It was originally built for the Denver and Rio Grande by the Jackson and Sharp car shop in Wilmington, Delaware in 1882 as a kitchen and commissary car, with sleeping accommodations for six.  It was one of three cars built for a special train to be used by D&RG General Manager David C. Dodge, and was known as Business Car C.  It was finished inside with ash wood.”

“Business Car A was a luxurious sleeping and observation car that was later sold to the RGS and later renamed the Edna.  It has been fully restored and is at Knott’s Berry Farm in California.  Car B was a sleeping and dining car, and was destroyed in an accident.  Our new project, Car C, was later converted to a railway mail and baggage car in 1906, and later into a bridge and building bunk car in 1926.  We will restore it to its original glory as the railroad manager’s special kitchen and commissary car.”

Moving the new car to Ridgway was a major logistical exercise.  A crane in Grand Junction loaded the car on to a lowboy trailer, which was then trucked to Ridgway.  Another crane was waiting at the museum to lift the car onto its temporary base of ties.  “This car was built with wheelsets (trucks) that are rare today,”  said Pettengill. “Locating a set will be difficult; we may have to fabricate them from blueprints.  This will be a long restoration project, but when we are through, it will be a very special piece of our railroad history.”

The museum is open from 10 AM to 3 PM daily until June first, when summer hours of 9 AM – 4 PM will go into effect